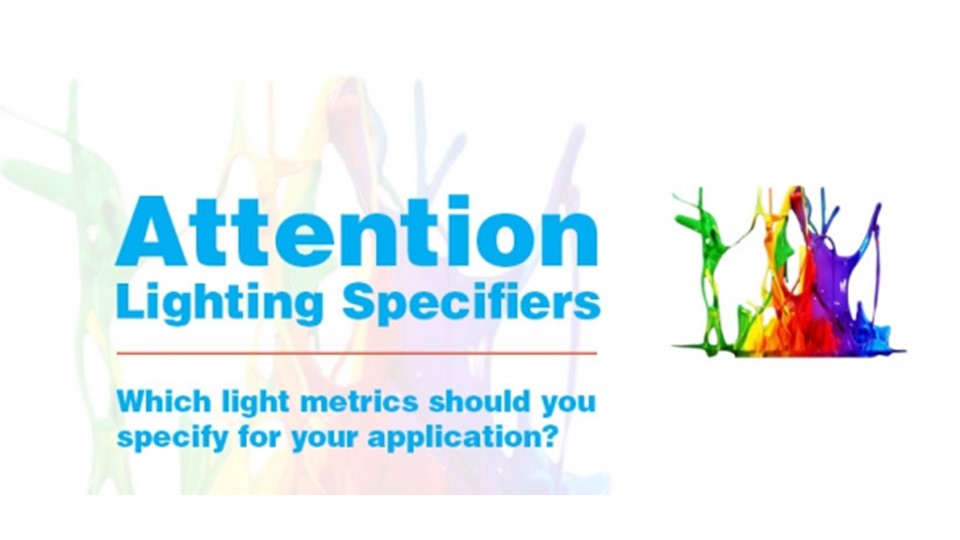 Which light metrics should you specify for your application?

Our previous article explained the various LED colour metrics commonly used in the industry. This article now describes which metrics should be specified for different applications.

CCT (Correlated Colour Temperature) and CRI (Colour Rendering Index) are traditionally the standard industry terms used to specify the light produced by a luminaire. Ever improving LED technology, however, together with more discerning and demanding consumers, has resulted in LED manufacturers creating many customised and optimised outputs.

Specialised CCTs, such as Meat and Bread have been carried over into LEDs from fluorescent technology, and their uses are self-explanatory. Each LED manufacturer, however, has developed differing approaches to optimizing lighting and even when there are similarities, their unrelated terms give little clue as to their actual performance. Brilliant Mix, Class A, Vivid, Décor, CRI97 and Ultra-White are just a few of the terms used to describe specialised LEDs currently available.

The general rules that we follow to help us select the correct luminaires are as follows:

During the day, we use our highly colour sensitive photopic vision. At night, however, the colour becomes less important and more lux sensitive scotopic vision takes over. The eye’s sensitivity curve (known as the luminosity function or V(λ) curve) also shifts its peak sensitivity wavelength from yellow to blue. This is why higher colour temperatures are used for exterior LED lighting – usually 5000K and above, with 5700K and 6500K being common. Exterior lighting is largely used for safety reasons, and so high lux levels are deemed to be more important than light quality. This is why monochromatic sodium vapour lamps (up to 200lm/W) are traditionally used for streetlights, despite their lower scotopic performance than higher CCT polychromatic light sources. Thus high CRI is also usually not required for exterior lighting. LEDs can now have good CRI and high efficacy so CRI > 70 is usually considered to be sufficient, with luminaire manufacturers taking advantage of the lower CRI LEDs’ higher efficacy.

LED lighting for homes has to try and replicate the feel of incandescent bulbs and so good CRI is essential (incandescent bulbs have a CRI of 100). CRI > 80 is standard and the CCT of the luminaire is largely determined by the room being illuminated, with personal taste being very important. Rooms which require an inviting, cosy ambience such as living rooms and bedrooms will use a CCT of 3000K or less. Kitchens and bathrooms, which require a brighter, crisper feel will use a CCT of 4000K and over.

Retail lighting design is much more technical, with much more scope for optimising lighting based on specific applications. The typical choice of CCT is still 4000K with CRI > 90 becoming the accepted norm. More and more LEDs which boost the vividness of colours – ideal for a retail environment – are becoming available. They also keep the ‘whiteness’ of white at the same time, regardless of CCT. Retailers have in the past felt that 3000K produces whites which are too ‘creamy’ while 4000K can create too much of a ‘cool’ appearance. 3500K was therefore selected as a middle ground – with the change in CCT being the only way to alleviate the problem. The choice of CCT will still be down to the individual retailer but the new generations of LEDs termed Vivid, Brilliant, Class A, Décor etc. allow 3000K to have bright whites and 4000K to have bright, rich colours. The excellent overall performance of these LEDs, both in colour rendering and enhancement and energy efficiency, therefore makes them an ideal choice for the retail environment.

For industrial illumination, such as task lighting and warehouse lighting where 24 hour per day operation is common, the focus is primarily on high lux levels and lm/W performance. Higher CCTs of 5700K and 6500K are popular with CRI > 70 usually found acceptable. Some retailers like to have a constant CCT from warehousing, through to despatch and finally in the store, with 4000K then being the most appropriate choice.

LEDwise development engineers keep up to date with the performance of all of the current LEDs and can help you to optimise your lighting solutions. Please contact our Technical team for advice on your project’s requirements.

Which product are you looking for?